In the last couple weeks, Steam just announced their new Steamdeck – which for those who aren’t video game obsessed, is a small portable gaming system that is running, quite literally, a computer. The key is that it is made very specifically to play your Steam games. So, that brings us to me, someone who plays altogether way too many video games. So many video games it gets in the way of important things like getting podcast blog posts up on time and doing my job effectively and providing love and support to my family. Why do any of that when I’ve almost gotten the final Valkyrie in God of War?! PRIORITIES, PEOPLE!

That leads us to this list – a list of video game technology I have owned that sadly, for one reason or another, completely failed…

The Power Glove – Yeah.. it’s so bad.. When I was a kid, the commercials for the Power Glove were everywhere. As a science fiction nerd, it looked like the type of thing you could wear in your Blade Runner future. It was loaded with a hundred buttons, it had tentacle pipes coming out of the fingers, it was made to look like you were about ready to journey through the slipstream of data and right into the non-existent information super-highway at unthinkable speeds like 14.4 baud.

I wanted it to play one game well.. only one. And that game was Mike Tyson’s Punch Out. I’d heard you could drive the car in Outrun with your hand on the invisible wheel… didn’t care. You could, ummm… make Zelda move by waving your hand vaguely up and down? I don’t know – and it didn’t matter – you should have been able to throw a punch at your screen and have it ‘get it’. Sadly, it didn’t. It was bad at everything. I would take it out to show people.. or put it on because it made me feel like I wa sin the future! Then it would go back in the box.

The U-Force – Everyone remembers the Power Glove, but do you remember the U-Force? I put a picture for you to maybe possibly remember the endless commercials that played during your late 80s rock block of Saturday morning cartoons. It was a laptop of a thing that you were supposed to run your hand over and make gestures to have it control the character. The idea was a freedom of movement that hadn’t been seen since The Power Glove!

Sadly, whatever its intention was – failed. the Infrared tech that ran it just wasn’t good enough to register consistently and, honestly, it was never quite clear why it existed in the first place. I mean, look at this thing… 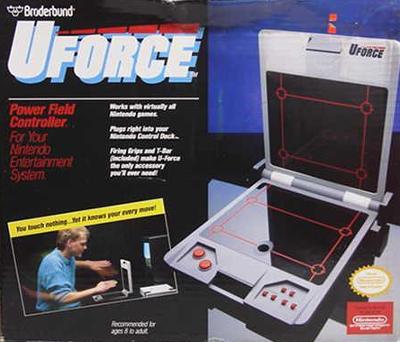 The Vita – Sony’s self-made albatross. The Vita is an amazing, pretty, compact, great sounding, fantastic feeling, handheld console that you can play your Playstation 4 on if you are on the same network. (It only works 25% of the time when on a different network). It could have legitimately been the thing that made the Playstation 4 a /must have/ instead of a ‘I’ll see how it goes’ with good enough support.

Sadly, in America, it bombed pretty drastically – it got no press whatsoever after its initial outting, it is missing a pair of shoulder buttons to make it replicate the Playstation controller, and its worst offending trait: it uses a memory card that is made by Sony instead of using the same MicroSD cards that you can get at any tech store.

I still pick it up and play games on it, although as time goes on, I find myself leaning more and more on my tablet for such things – and there are a few diehard Vita loving folks out there… sadly, Sony is not on that list, and I expect if the Steamdeck does half of what it says it does, the dust is going to start to pile up on it.

So what are some of your favorite video game accessories, loved or not?